Windows 7: Good to the last drop

For the majority of organizations, Windows 10 adoption can’t happen soon enough.  The security enhancements bring on a sigh of relief in an age of Ransomware and devastating zero-day threats.  There are, however, still isolated environments and service applications that happily run Windows 7, and will likely continue to do so up until Jan 14, 2020, when Microsoft stops providing security updates for the operating system.

Given there’s just under three years until 7’s end of support, some companies are even undertaking the grueling task of managing 2 production OSs, slowly upgrading to Windows 10 as hardware is refreshed.  If this is you, your help desk is in for a rough couple of years supporting it.

To keep Windows 7 going until the bitter end, we need to maintain an imaging environment to facilitate downgrades and break/fix.  The fact that Windows 7 hasn’t had a major release since my kids were still in diapers means there are a LOT of updates that need to happen to an install, just to bring it up to current patch levels.  It makes managing that reference image a little different from the norm.

I recently worked with one of these organizations, and we used MDT to manage their standard reference image.  We followed all the typical steps to automating the build process, and everything worked great.  Once we got to the point of thickening up the image a bit, things started to go awry.  The problem was an un-scriptable application and hotfix that didn’t like Sysprep’s generalization process.  The result was a rebuild of the reference image, and some noteworthy changes.

Here’s a full Level 200 Step by Step for creating a Windows 7 Reference Image after its end of life:

If your organization is running any virtualization solution, you are able to deploy a Server 2016 VM and install Hyper-V using nested virtualization.  However, it may be more appealing to just use your workstation for this, and that’s fully possible out-of-box with Windows 8.1 and up.  You can do it through the GUI, or just use PowerShell.  Here’s the command:

After the machine finishes rebooting, you’ll need to configure the vSwitch.  If you only have one NIC, use:

Download the Assessment and Deployment Kit for Windows 10, as well as MDT 2013 Update 2, and install both.  Launch the Deployment Workbench and create a new Deployment Share.  Add the source files from your Windows 7 ISO by Importing it to the Operating Systems node in the Workbench.  Once the image has imported, create a Standard Client Task Sequence called Create Windows 7 Thin Image, accepting all the defaults.

In the properties of the Deployment Share, on the Rules tab there’s a button to edit the Bootstrap.ini.  In here we need to add the following lines:

To automate the LTI screens that don’t pertain to the image build process, we’re also going to add the following Rules to the main list (customsettings.ini).  The first 9 need to be customized to your environment:

Once both these files have been modified.  We need to perform an Update Deployment Share action to create the Lite Touch Boot Image ISO.

For this stage of the process, there’s really only two things we need to do:  Install the Convenience Rollup and Pause the Task Sequence.

To install the Convenience Rollup, it first requires an update to the Windows 7 Servicing Stack which is not included in the base ISO.  To do this, we’ll add the update in as an Application.  The update binaries are in the Windows Catalog, and can be downloaded from here.  The Convenience Rollup itself will be installed in the same fashion.  We’ll  download it from here and extract the contents into a folder.  Then, we’re going to add it as an application in MDT, using this as the install string:

The final change, we’ll add a pause  to the task sequence, using a Run Command Line action after the Install Applications step.  The command is %SCRIPTROOT%\LTISuspend.wsf

Now we’re going to create our Win10Ref01 VM.  If you put the LiteTouch_x64.iso in C:\VMs, use these two commands to build the VM:

Connect to the VM and start it, booting into the “DVD” drive.  Select the Create Windows 7 Thin Image task sequence, and click Next.  Due to the configuration in our rules file, we should now only see a screen to confirm our Image Capture settings.  Validate/Update the settings and click next to initiate the build.

When the Task Sequence pauses, check Windows Update to confirm that the Convenience Rollup applied and connect to Windows Update to finish patching.  Once all patches have been applied, shut down the VM.  From File Explorer, place a copy of C:\VMs\Win7Ref01 in another location.  This will serve as a backup of your patched Windows 7 VM.  Once the copy has finished, launch the VM and re-connect.  On the desktop will be a “Resume Task Sequence” icon.  Double-Click this to resume the Task Sequence, which will Sysprep the VM, reboot into WinPE and capture the image.  NOTE:  By Default, MDT does not grant write privileges to the Captures Folder.  You will need to ensure proper access is granted at the NTFS and Share level

Once the Image has been fully captured Import it into MDT as a Custom Image.  We will use this image to create the next sequence.

At this point, you’re also going to want to import into MDT any applications that you will be using in your Reference Image.  Even if the application cannot be silently installed, it is a good idea to add it in with the install string, as this will make the image build self-documenting.  Note the Application GUID that is assigned to each application as they are imported into MDT.

In File Explorer, navigate to C:\DeploymentShare\Control and make a copy of CustomSettings.ini and place it in the same folder.  Rename the copy to CSApps.ini, then edit it.

After SkipSummary=YES in the file, place the following lines:

Of course, you will need to replace <GUID> with the actual application’s GUID as its shown in MDT.  You can add/remove lines as needed, just make sure there are no gaps in the numbering.  When finished, Save the file.

We’re then going to need to Edit the Task Sequence, and scan the steps for “Gather.”  There are a few.  At each of these steps, make sure the Radio button to process the rules file is selected, and replace CustomSettings.ini with CSApps.ini.  Then, add in the same Pause step as before, in the same place right after Install Applications.

At the Pause step, we just need to ensure that our applications and configurations were completed successfully, then proceed to capture the completed Reference Image.  We’ll use this as our starting point for all deployments going forward, and with the steps we’ve added along the way, keeping it up to date for the next 2.5 years will be a breeze. 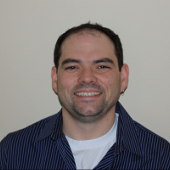 Émile Cabot is a three-time Microsoft Most Valuable Professional (MVP) who started in the industry during the mid-90s, and has been deploying Windows ever since. He has a strong background specializing in datacenter and deployment solutions, and has spent many years performing infrastructure analyses and solution implementations for organizations ranging from 20 to over 200,000 employees. Émile is a published author with several titles, including Advanced Windows Deployments Using 1E Software. He organizes the Calgary Microsoft User Group, blogs on CheckYourLogs.net, and has presented at several conferences, including Ignite, VeeamOn, TechReady, and MVPDays. You can find him on Twitter under the alias @ecabot. He actively volunteers as a member of the Canadian Ski Patrol, providing over 250 hours each year for first aid services and public education at Castle Mountain Resort and in the community.

PowerShell – Add a Direct Member to a SCCM Collection